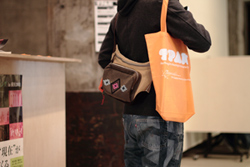 The disaster caused by the Great East Japan Earthquake on March 11, 2011 and the accident of the nuclear plant drastically changed our environment. Contradictions of the contemporary society that had already existed have become explicitly visible, and performing arts professionals need information and ideas more than ever to survive. To discuss “post 3/11,” which can also be said to be the times of networking, we hold “TPAMiY Summer Session” in August as a project in association with Performing Arts Meeting in Yokohama (TPAM in Yokohama / TPAMiY) that was held in February 2011.

*In Japanese, without simultaneous interpretation. It might be possible to have a non-professional volunteer English interpreter whisper next to you upon request. Please ask us in advance.
*Some of the sessions will be broadcast on YouTube with English subtitles.

Private organizations and Public institutions have been working on various activities for the reconstruction of the stricken areas. This session is for learning about the current activities and discussing future plans with Yuhei Sakata from an intermediary organization that has launched a program for supporting reconstruction in the field of the arts as the moderator.

A talk by Kyohei Sakaguchi, a writer / artist who has published such books as TOKYO Zero-Yen House Zero-Yen Life and Urban Hunting Life Starting from Zero. His works had already been with cautious points of view on the society before the earthquake, and right after the earthquake, he opened “ZERO CENTER” as a guidance bureau for earthquake refugees. This session introduces his out-frame “art” that he sees as “theatre.”

Chim↑Pom’s exhibition REAL TIMES in response to the accident of the nuclear plant, which can be said to be in-frame in contrast to Kyohei Sakaguchi’s activity, also drew a lot of attention. Both of them immediately responded to the unprecedented accident as artists. Having Ryuta Ushro as another speaker in this session, we discuss how people who engage in art and expression can respond to the unprecedented situation.

Technical staff studies and examines possible forms of creativity in performing arts in the society with potential “rolling blackouts” and possibility of electricity shortage especially in this summer and discusses future directions.

Demonstrations for society without nuclear plants have been going on across Japan, and especially “Sound Demo,” which established a very different style from traditional demonstration, has been gathering a large number of people transcending ideological differences. This session is an attempt to discuss demonstration as an expressive form.

Comment from the moderator Keisuke Sakurai
After the earthquake and nuclear plant accident, everyone is talking about things like “What art can do now” everywhere. I tried to ask this question to myself, and wanted to answer like, “Well, no! That’s impossible!! I think the best thing to do is to volunteer as an individual irrelevantly to art,” but what I have done in public in these three months are just screaming and dancing in “No nukes” demonstrations. However, those things were very important to me, and I think it’s possible to call it “expression.”
I also wondered if it’s possible to think of the form for demanding and self-expression called “demonstration” in the same way we think of media / expression tools such as music, fine art or theatre. For example, I found something new that was not in the traditional demonstration in “Sound Demo” and thought that it was worth considering as a question of “expression.”
I met Miyazawa-san and Mita-san in demonstrations and walked together. I remember that Mita-san was a leading figure of “Sound Demo” against the war on Iraq. Miyazawa-san was the most active twitterer about the nuclear plant accident and demonstrations on my TL.
That’s why I want to hear from them.

Globally in the global economic crisis and domestically in the situation where establishment of a bill called “Theater Law” and an arts council has been discussed, networks on an individual level are being formed in Japan to make activities sustainable, to share information and intellectual property or to advocate. The fact that the responses to the earthquake disaster of Japanese performing arts professionals were split up made us aware of the necessity of new networking that should enable us to withstand an overall crisis. This session invites people who are leading networks of performing arts to discuss necessity and objectives of networking and establishment of a networking organization that should connect us internationally.

Since “3/11,” the accident of the Fukushima Daiichi Nuclear Power Plant of the Tokyo Electric Power Company (TEPCO) has been tearing Japan apart. We invite the ex-designer of nuclear reactor containment vessel Masashi Goto, who has been analyzing the still ongoing accident on the Ustream channel of Citizens’ Nuclear Information Center, and the theatre critic Hidenaga Otori, who studied control engineering at Tokyo Institute of Technology and has been questioning the announcements and reports by the government and TEPCO and the attitude of media with a “diagonal gaze” involving cultural and theatre critique, to discuss the fundamental problems of the “accident.”

How to make reservation

Email the following information to us:
1) Name
2) Organization
3) Phone number
4) Email address
5) 3-day ticket or 1-day ticket (specify the date for 1-day ticket)
And pay at the door.

*1-day ticket (¥500) cannot be appropriated to other days than the specified day.
*3-day ticket (¥1,000) availability is limited (50 sets).
*The capacity of this event is 150 per session. We cannot accept reservation if the capacity is filled.
*We do not offer professional simultaneous interpretation in this event, but it might be possible to have a volunteer English interpreter whisper next to you. Please ask us in advance.